I went down to the basement to fetch our candy bowl for Halloween: 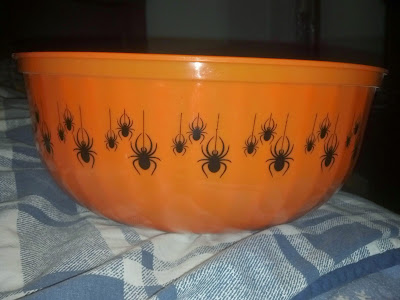 Look what I found inside: 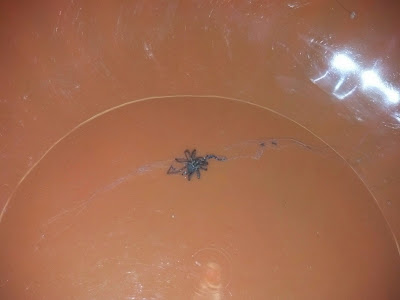 Posted by David Johnsen at 8:53 PM No comments:

I would be first in line to vote early if it meant I wouldn't have to see any more damned political commercials or listen to the answering machine pick up another damned robocall.

Today during a TV show there was a commercial break where every single advertisement was for politicians, one after another. Please, somebody try to sell me auto insurance instead! For the first time in my life, I wished I could see a Massengill commercial.

Why, yes, Illinois politics does make me feel, you know, not-so-fresh.
Posted by David Johnsen at 10:51 PM 1 comment:

Who's Better, Who's Best in Football? Setting the Record Straight on the Top 60 NFL Players of the Past 60 Years by Steve Silverman - Ranking the greatest football players is a fool's errand for many reasons, but Silverman's choices probably aren't any worse than anyone else's. I learned a few things from the four or five pages of biographical and statistical evidence he gives for each player. This book is a bit dated, but an update with 65 players of the past 65 years is coming out in early November (which I'm linking to below instead of the edition I read). 3 stars

Just Ride: A Radically Practical Guide to Riding Your Bike by Grant Peterson - Wow, this may be the best bicycling book I've ever read! American recreational bicycling has become unnecessarily complicated by companies drawing their primary inspiration from professional racing. Actually it's getting better; when I got back into riding in 2000 it was much worse. Anyway, Peterson cuts through a lot of the bullshit with great advice about everything bike-related. Had he written this 15 years ago, he could have saved me a lot of money. 5 stars

We Thought You Would Be Prettier: True Tales of the Dorkiest Girl Alive by Laurie Notaro - I didn't enjoy this quite as much as her first two books, but it's still mostly funny. 4 stars

Chasing the Rising Sun: The Journey of an American Song by Ted Anthony - I didn't expect an entire book about "House of the Rising Sun" to be so riveting. I love the idea of how Anthony became obsessed with one song and spent years tracking down recordings and interviewing performers. It's a great case study of how folk music evolves. 5 stars

Posted by David Johnsen at 9:11 PM No comments:

Because I Said So! The Truth Behind the Myths, Tales & Warnings Every Generation Passes Down to its Kids by Ken Jennings - This may be the only book I've ever read that can be found in the parenting section (though I found it in new arrivals). Writing in an enjoyable style, Jennings looks at scientific research to determine which parental sayings or scoldings have merit. I also bought a copy for a friend who just had a baby. 5 stars

Visit Sunny Chernobyl and Other Adventures in the World's Most Polluted Places by Andrew Blackwell - Anybody can enjoy a lovely beach, a lush meadow, or a waterfall on a clear mountain stream, but fewer can find beauty in exploited tar sands, a clear-cut Amazon forest, or a river of human waste. Blackwell takes us to places I'd rather not go myself, which is the best kind of travel book. 5 stars

I Never Met a Story I Didn't Like: Mostly True Tall Tales by Todd Snider - Anyone familiar with Snider's music knows he is a great storyteller and a funny guy. This book doesn't disappoint. The backstories of his songs are as good as the songs themselves. 4 stars

Northern Songs: The True Story of the Beatles' Song Publishing Empire by Brian Southall with Rupert Perry - Had this book been about any other songwriter(s), it probably would have bored me to tears. Being about the Beatles makes it more interesting, but Northern Songs isn't something most people outside the music business would enjoy reading. Also it seems like the authors rushed the last few chapters, or maybe the copyeditor quit early. 4 stars

Posted by David Johnsen at 4:30 PM No comments: