However bad winter is in Chicago, it seems like it's always worse in Northwest Indiana.

Posted by David Johnsen at 5:07 PM No comments:

I wrote most of this on January 1st but never got around to posting it...

Unfinished business month was a great success. I didn't expect to read half of the unfinished books I started with, but that's what I did. Of the eleven, the best were You Never Give Me Your Money, Don't Believe It!, and The Ig Nobel Prizes. But then there were others that I had stopped reading previously for good reasons.

Overall, my approach to books in 2013 was interesting but stifling. By August, there were a lot of books I wanted to read but didn't because I wanted to stick to the monthly theme. I finished a total of 95 books in 2013. While that was much lower than 2012 (122 books), it was more than I expected and not far from my 2009 total of 101. Of course, it helped that I only had to read about two thirds of each book I finished in December.

I didn't keep track of how many books I acquired as in previous years, but I'm sure I came out far ahead in 2013. I think <gasp> my book buying binge days might be over. In early October I was surprised to realize I hadn't been in a bookstore for an entire month. Then I didn't go to a bookstore in all of December either, not even for Half Price Books' 20% off store-wide sale (seriously, during those sales I used to hit at least four locations).

I'm not sure what to do for 2014. I won't bother tracking finished versus acquired because I don't think that's an issue anymore. I had a few ideas for how to select what to read next, but I think I will simply read whatever I want and write about it here. Stay tuned.
Posted by David Johnsen at 11:47 PM No comments:

The Chicago Police Department lost one of its finest veterans on Thursday night. After many months of watching her condition slowly worsen, we put retired bomb sniffer Rexy to sleep a few weeks short of her 15th birthday.

Rexy had megaesophagus; basically, her throat didn't work properly. That made it difficult for her to swallow food and especially water. There isn't much that can be done other than taking great care in feeding and watering. For the last two months of her life, we gave Rexy most of her hydration through canned food and jello. We couldn't even let her outside when winter came because she would just eat snow until she regurgitated (fortunately she adapted well to using pee pads by the backdoor). As her condition deteriorated, she also began to have violent sneezing fits (caused by megaesophagus).

Aside from megaesophagus, Rexy was in decent shape for a dog her age. She was small for a labrador retriever, about 50 pounds, and she still had pretty good mobility. That made saying goodbye an especially difficult decision, but it was becoming clear she was enjoying life less and less. When she refused to eat deli slices of turkey on Thursday, we knew.

Rexy served about eight years for the CPD sniffing for bomb materials at O'Hare Airport. For some reason she didn't get along with her handler's new service dog, and that's how we ended up with her in October 2012. I had trouble relating to her at first. Perhaps due to her training, Rexy wasn't as demonstrative as a typical lab. I could only pet her for a short time before she would walk away (Moose, on the other hand, would never leave while being petted, and usually nudges me for more whenever I stop). Over the last few months, we got much closer as I took on more of her care. By the end, she often slept by my side of the bed.

Rexy was a somewhat dignified dog, but you wouldn't know it from this picture of her with a Yoplait yogurt container: 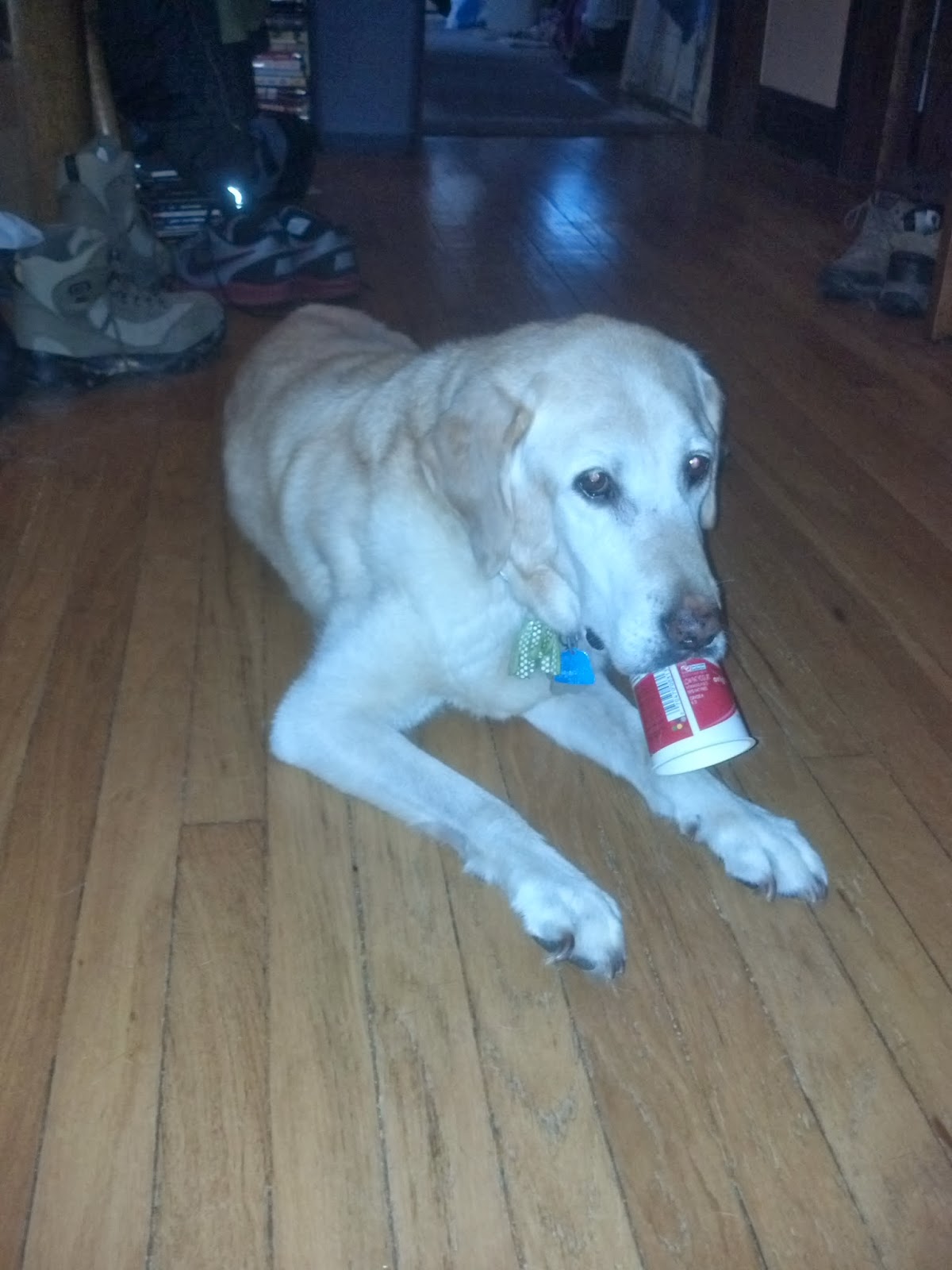 Posted by David Johnsen at 10:39 AM No comments:

Ever since I was young, I've felt terribly uneasy about the distant future, especially end-times predictions. I'm not talking about religion so much as science. This fear and anxiety is irrational because there is no way I would be alive by then. Does that make it better because I won't have to endure it, or does that just drive home the realization of my ultimate demise long before those things happen?

Anyway, a graphic from the BBC lays out Earth's future as far as one hundred quintillion years from now. Something about seeing it on a timeline makes it so much worse than just reading a book about it. I shouldn't have read the timeline, but I couldn't not read it either. Now I'm an anxious mess. Goodnight, everybody. Sweet dreams!
Posted by David Johnsen at 1:16 AM No comments:

Outside it's snowing and the temperature is dropping. Inside I'm watching playoff football and sipping Evan Williams Apple Orchard. Damn, that's smooth.

Posted by David Johnsen at 2:10 PM No comments:

The Moose in Winter 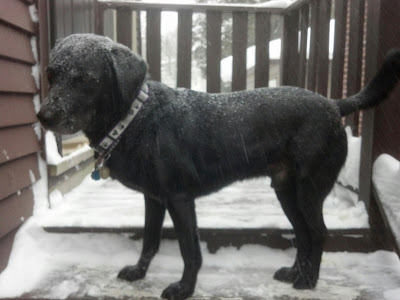 Posted by David Johnsen at 1:55 PM No comments:

Bastard of the Day

I ordered a package from Phoenix, AZ that shipped via FedEx on December 26. I've been following its progress online, and it arrived in Chicago on December 30 at 3:38 PM. When that package left the Chicago facility on December 31 at 5:37 AM, I thought, "Oh boy, maybe it's out for delivery and I'll get it before 2014!" Alas, no package arrived so I resigned myself to waiting until January 2.

After checking outside the front door for my package today, I went to the FedEx website. My package arrived at 1:10 PM today... at FedEx SmartPost in New Berlin, WI. That's near Milwaukee. And now I have a projected delivery date... Monday, January 6! Those bastards had my package in Chicago—where I live—on December 30, and I'm not going to get it until a week later?

UPDATE 01/05/2013 - Okay, our awesome post office* delivered my package on Saturday instead of Monday as predicted by FedEx. That still doesn't let FedEx off the hook for bouncing my package around all week after having it so close to my home on December 30. Sometimes the transparency of online tracking doesn't reflect well on shipping companies. I would have been better off thinking my package was just moving really slowly across the country rather than knowing they doubled the shipping time by sending it away from me.


* I mean that sincerely. We have a great mail carrier who busts his ass to get the job done (as did his predecessor). Also I have a feeling the post office wanted to deliver everything they could on Saturday because Monday's high temperature is expected to be -10 degrees Fahrenheit (yes, I said high, and yes, that is negative—and that's without the wind chill!).
Posted by David Johnsen at 2:24 PM No comments: